Today here in the UK it is Mothering Sunday, so firstly happy Mother’s Day!! One thing I have noticed in my research of great lady scientists and technologists is how few of them married or had children. It is perhaps a sign of the times that they lived in, or that we live in now, that to be a successful woman in science or academia used to mean forfeiting a family.

I have read how the ‘done thing’ was to give up work once one got married, and I suppose this was both a cultural sign of the times, and also a practical one. I can’t imagine the universities who were letting women in for the very first time, or the academic institutions that would not even pay women for their work, were going to provide childcare options as well! Neither do I expect there were many stay-at-home dads, work share schemes or laboratory crèches! I am far from saying that all women desire a family, and many women then and now would rather focus on their work than having children round their ankles, but it is interesting to note that more women in the field of science and technology in current times seem to at least have the option of doing both… and extra admiring love to them this Mother’s Day!

Anyway. After a bit of digging I have found someone who was both a mother of SIX and a science writer, astronomer and mathematician in a time where a women doing anything except playing the piano forte was considered inappropriate, so let’s give her a round of applause… 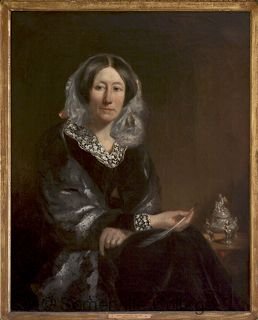 Mary (Fairfax) Somerville was the daughter of Sir William George Fairfax (an Irish vice-admiral); born in Scotland in 1780. Like so many of our other heroines she was a willful, ‘spirited’ girl, leading her own father to brand her a ‘savage’ and pack her off to an expensive boarding school, which is very much how things were done in those days (and occasional still, I know I was). Unsurprisingly she wasn't taught much other than the basics, but she had a thirst for knowledge and she was soon furthering her own education both with tutors and by her own initiative – she was evidently jealous of her brother’s tutelage, especially when she considered herself intellectually superior!

In 1804 she married her distant cousin, Captain Samuel Greig. They moved to London and Mary bore two sons. But it was not a happy time for her – although she could study more easily – surprise, surprise – her husband did not think much of women's capacity to pursue academic interests. Tragedy struck twice for Mary when she lost her husband and then one of their sons within a year. She returned home to Scotland upon their death in 1807.

Mary’s life was going to take a positive turn though. Grieg had left her enough money so that she could independently pursue her intellectual interests. Mary gained encouragement from leading intellectuals and scholars in Edinburgh, and advanced her studies of higher mathematics and physical astronomy. She read Isaac Newton's book Principia and began to submit solutions to problems posted in contests run by mathematics journals. In 1811, Somerville won a silver prize for solving a diaphiantine equations problem in Mathematical Repository.

Romantically Mary had some good fortune too, falling in love and marrying army doctor William Somerville in 1812. The couple had four children, three daughters and a son, though only two survived into adulthood. Unlike Grieg, William Somerville was completely supportive of his wife's intellectual interests. He was proud of her achievements and encouraged her to further study Greek, geology, botany, and mineralogy.

Four years after they were married, the family moved back to London, where William was elected to the Royal Society of Surgeons, and Mary established a name for herself in the British scientific society. In 1826, she published the results in "On the Magnetizing Power of the More Regrangible Solar Rays," in the Royal Society's Philsophical Transactions (Though her husband had to present the paper, because women were not permitted to attend meetings of the Royal Society – obviously!)

Mary’s reputation went from strength to strength and over the years translated complex books on astronomy and gravity into layspeak. The success of these publications prompted the Royal Astronomical Society, in 1833, to name her an honorary member. Mary’s next book was an even bigger success. The Connection of the Physical Sciences was first published in 1834, and summarised all that was known in the physical sciences, but also showed how different branches of science overlap in techniques and ideas.

When William became ill in 1838, the family relocated to Italy. Mary spent the rest of her life mainly on the continent—even after the death of her husband in 1860. Though family concerns were paramount, Mary continued her scientific work and spent most of the remainder of her life writing books on all aspects of science. She even ruffled religious feathers for arguing that the earth was older than stated in the Bible, based on geologic evidence.

Mary's last work of note was the two-volume On Molecular and Microscopic Science, published in 1869. She was awarded the Victoria Gold Medal at the Royal Geographic Society of London. Although she was a patron of the Society, she never achieved member status because of her gender.

Mary Somerville died at her home in Naples in1872. She was almost 92 years old and still working on a mathematics article at the time of her death. She was honored by Oxford through the naming of Somerville Hall, the creation of the Mary Somerville scholarship for women in math, and the establishment of Somerville College in 1879.

It's interesting how Mary is presented here - with her thoughtful feather, light and bird-like...

A little bit on the presentation of the Lady-Scientist in portraiture, via verse: